It was attempt number three for SpaceX after their years-long endeavour to safely land and recover a first stage rocket from the Falcon 9 launch vehicle – and they nailed it.

The landing took place just ten minutes after the launch of the ORBCOMM-2 Mission which saw a modified version of a Falcon 9 rocket successfully deliver 11 satellites to low-Earth orbit (December 21).

The success comes after some months of quiet from the spacefaring company. In June the company had planned a third attempt to land a first stage, but never got the chance after a catastrophic failure blew the entire Falcon 9 out of the skies shortly after launch. Doubtless then that this was a momentous occasion for all at SpaceX – renewing spirits for the ambitious, but unmistakably difficult, road ahead of the company.

After all, taking satellites into orbit is how SpaceX finances itself; but developing technologies for facilitating better, cheaper access to space, and eventually getting to Mars — that’s SpaceX’s true intent and purpose, its raison d’être. Against this backdrop, successful landing of that first stage represents a critical juncture, something SpaceX will be building off as we begin to see more first stage landings, and the inaugural launch of the massive Falcon Heavy next year (perhaps as early as April or May 2016).

The grace with which the first stage returned to land does little to convey the hard physics and technical competencies involved in what SpaceX achieved yesterday.  A complex series of manoeuvres beginning after separation of the first and second stage rockets — including all important boostback and re-entry burns of the first stage to steady, slow and control its descent as it hurtles back to Earth. Deployable grid-fins mounted on the booster’s outside surface and its landing gear are also central to the first stage’s landing capability.

SpaceX choose to attempt the first stage landing on land, at a new custom built landing zone (LZ1) just a short distance from the launch pad. Previous landing attempts in January and April had been made using a sea barge without success. LZ1 is built from reinforced concrete, and measures 86m (282ft) in diameter — a tiny target considering that the first stage descended from 200km (124 miles).

What About Blue Origins?

In Falcon 9’s technical features, together with its operational capability, it’s far apart from Blue Origins’ New Shepard — the rocket that made headlines at the end of November when it too landed after a visit to space. Though an impressive feat, what Blue Origins accomplished was, in several ways, quite different from what SpaceX are involved in.

Why? Well for one, because New Shepard remains mostly vertical throughout its ascent and descent — consequently there’s no need for a ‘flip’ manoeuvre and no resultant aerodynamic stresses to contend with, the likes of which Falcon 9 has.

Additionally, the two vehicles are vastly different. Compared with a Falcon 9 first stage booster, New Shepard is considerably shorter; upon descent, it’s travelling at far lower speeds (Mach 3 versus Mach 5.5 – 7.5) with much less mass; and critically, it’s only reached some 100.5km (62 miles) in altitude before descent, whereas the Falcon 9 booster descends from around 200km (124 miles).

These distinctions are better understood when you contrast the intentions of the New Shepard against those of Falcon 9. The former is designed to take tourists into sub-orbital space for four-some minutes of weightlessness. The latter is built to deliver whole payloads into orbit, hence the need for a much larger, more powerful launch & delivery system.

Altogether, SpaceX were challenged to design and build the Falcon 9 first stage in a manner that ensured it would not only deliver on its primary mission of payload delivery, but survive its descent back to Earth — this has taken new engine architectures, novel computer guided control software, and mastery of rocket flight that’s simply unparalleled. 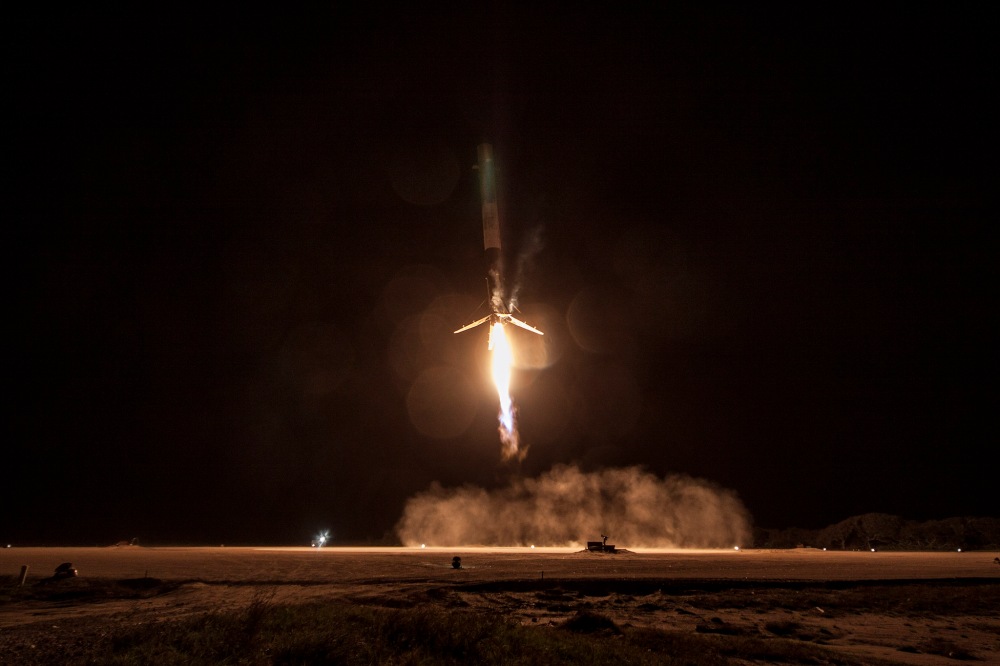 Now that SpaceX have safely recovered their first stage, they will embark on a series of tests and evaluations to assess the performance of the booster. At the very least this will involve a hold-down firing in which the booster will be secured, and simulate a second launch. Beyond this, we have little detail — but it will be imperative for SpaceX to thoroughly examine all elements of the rocket with a view to understanding what steps would now be required to get a used first stage scrubbed up, and good to go again.

Musk has already stated that his company have no plans to re-use this particular first stage. Rather, it will be retained as a keepsake of the momentous achievement. We know that more first stage recoveries are planned for 2016 — so plenty opportunity then, to take the exciting step of re-using a first stage rocket.

The Falcon 9 rocket that featured in ORBCOMM-2 Mission was actually somewhat enhanced in comparison to Falcon 9s of missions passed. Modifications were made with reusability of the first stage in mind, as well as to add mission capability to the Falcon 9 system (i.e. it can deliver larger payloads whilst retaining enough fuel for landing of the first stage).

Referred to as the Falcon 9 V1.1 Full Thrust, the new vehicle boasted an extended, stronger second and inter stage; the additional 1.2m means the complete vehicle now stands at 70m. These changes were designed to accommodate extra propellant — fuel —  (liquid oxygen (LOX) and rocket-grade kerosene (RP-1)) that the Falcon 9 uses. Speaking of propellant, that was also different. The LOX had been supercooled to -206.7 °C (-340 °F) and RP-1 to  -7 °C (20 °F).

As Musk noted in a tweet prior to launch: “Deep cryo increases density and amplifies rocket performance. First time anyone has gone this low for O2“.

Pre-launch entertainment from SpaceX during their webcast offered further insights on these modifications, and added that they gave the Falcon 9 33% greater performance.

A more complete overview of the Falcon 9 rocket, the significance of reusability in space flight, and insights on the complexity and reasoning for the burns, and other processes involved in the landing, are covered here; while a primer on SpaceX is available through Successes and Delays: SpaceX’s Pursuit of Re-Usable Rockets.

More of SpaceX’s photos of the launch and landing are available at their flickr page.

The ORBCOMM-2 mission launch and landing can be viewed through SpaceX’s webcast: